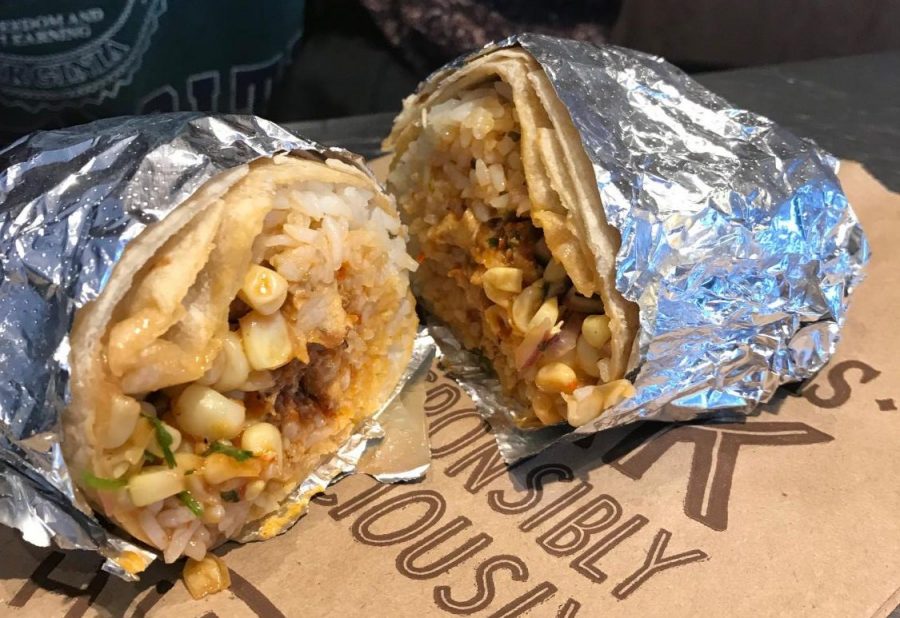 The chicken burrito from Chipotle, which received a final rating of 3 out of 5.

We (Aynsleigh and Anne) have decided to embark upon the ultimate quest: find out which burrito reigns supreme. Everyone has their favorites, but which one is actually the best? We decided to try out the three most popular burrito places in Stafford County and give our honest reviews. To maintain an even playing field, we will be ordering each restaurant’s take on a chicken burrito.

Sweeto Burrito:
Sweeto Burrito is a new burrito place on 610. We use the term burrito loosely, because they specialize in burritos featuring abnormal ingredients, including a double cheeseburger burrito with fries and an entire burger. The burrito we decided to order is the Buff Chick with “boneless crispy chicken, tater tots, cilantro ranch, and sweet hot sauce.”

If I had to choose one word to describe this experience, it would be confusing. The ambiance of the actual restaurant isn’t too bad. It’s a typical quick eats place, nothing special. It wasn’t very crowded, but it was a Wednesday evening in Stafford, so not much is expected. There was a cute elderly couple splitting a cheeseburger burrito, something I wasn’t expecting to see. The food itself is another story. I can’t seem to wrap my head around when you would go out of your way to eat this food. Maybe people eat it for the novelty of it, but the only time I can imagine craving this would be at like 2 am. Alas, they close at 9 pm.

The actual food wasn’t bad. I liked the taste, but the sweet hot sauce was definitely overpowering, and was pretty much all I could taste. The sauce had a good flavor, not too spicy but with a little bit of heat, but I would have liked more variation. One of my favorite parts of burritos is having a lot of different flavors from each of the components, but this burrito tasted like a sponge of flavor with a few different textures. The tater tots themselves worked surprisingly okay inside a burrito, and I liked getting the occasionally crunchy bit, but once again I wish I could actually taste the tater tot flavor. Chicken itself seemed good quality and there was a lot actually in the burrito. I wanna say the tortilla was solid, but it acted as more of a container and didn’t have tons of structural integrity.

Afterwards, my stomach made a lot of noise. I sounded like an actual whale. In general, I don’t think my body was very happy with me for putting this monstrosity in me. I only ate half and I think I may have died if I ate any more. I will give them points for originality though, because who else has the gall to actually follow through on a business model that sounds like it was made up during a drunken frat party.

Sweeto Burrito was an experience I don’t think I’ll ever forget. The inside of the restaurant was very nice – it reminded me of Mission Barbecue and Cookout. I guess all of the American greaseball restaurants have a theme going. The service was wonderful; when Anne and I walked in we were greeted, a manager checked on us during our meal, and the staff said goodbye to us when we left. The food was out in minutes. We ordered the Buff Chick, which is what seemed the least terrifying of all their menu items that defile the classic burrito popularized by the likes of Chipotle and Qdoba. Inside of the unassuming, kind, and easy on the eyes tortilla, there was buffalo chicken, tater tots, and ranch.

This burrito was a mess, both literally and figuratively. Literally, it was delicious, but would not stop dribbling everywhere. Unfortunately, the tater tots inside acted like little sauce sponges, so the burrito tastes like chicken and tater-tot textured buffalo sauce with the slightest allusion to what might be ranch. Figuratively, the concern I felt over eating whatever this was kind of damaged me psychologically- it felt sacrilegious to Chipotle and my beloved tex-mex. I felt like an emotional mess after; my stomach was twisting not only with concern over what that even was, but in response to the wonderful mess of unhealthy american food.

Overall, the experience inside the restaurant is a five out of five in terms of fast food restaurants. However, the burrito itself was concerning and I suspect the wrongness of the situation was a major factor in the rating: three out of five burritos. It was decently tasty, but the flavors were not very distinguishable.

Everyone knows Chipotle, it’s the quintessential fast food burrito. And of course, it’s gained a reputation for its 2 dollar extra guacamole. Despite, the extra cash you may have to shell out and numerous E. Coli scandals, it still reigns supreme in the public eye. Aynsleigh and I tried to match Sweeto Burrito as close as possible, ordering a burrito with white cilantro rice, chicken, corn salsa, and hot salsa.

Everytime I go to Chipotle it’s the same: I get excited and then I actually eat the food and I’m slightly disappointed. I don’t hate the food by any means, it’s just not a burrito I would cry over, and that’s truly my measure of good food: something I would cry over. The ambiance in Chipotle is weirdly modern, with the metal tables, but it doesn’t feel like they’re trying too hard. Or trying at all.

The burrito as a whole was better than Sweeto Burrito. The tortilla was more substantial and wasn’t as flimsy or wet as Sweeto’s. It kept the whole thing contained and served its purpose well. The chicken had its own flavors, standing apart from the rest of everything, and it was my favorite part of the burrito. I also thoroughly enjoyed the corn salsa, a welcome addition that most burritos overlook. My main qualm was that the hot salsa was overpowering. By the end it was all I could taste and I ended up not being able to finish my half of the burrito because the hot salsa just wouldn’t give me a break. It, of course, was spicy, and I went in expecting that, but I still think you should be able to enjoy the flavors in conjunction with enjoying the spice, and I just wasn’t able to experience this.

This wasn’t my personal favorite Chipotle order, and it does have a step up on Sweeto Burrito because you have so many customization options. If/when I go back I will be choosing a burrito sans hot salsa. That’s the biggest lesson I’ve learned from this.

Chipotle is a total hit or miss – I either love what I got or I hate it. That’s probably because I rarely get the same thing – why not experiment when I have a bar of almost infinite food combinations? The food itself is good, it’s just what I end up doing with it. However, within the supposed confines of this showdown experiment thing, the burrito was ….. delicious. The spice was powerful, which was technically what I asked for, but it still mingled well with the other ingredients. The ambiance of the establishment itself was off. We went to the 17 location, but all Chipotles tend to have the same vibe. I don’t like the weird southwestern steampunk vibes, they’re too cold and blegh.

The ingredients held their own, and the flavors still mingled really well in the face of the hot sauce. Unlike Sweeto, the tortilla was hardy but still nice and soft and contained all of the ingredients without drippage or any falling apart. I would definitely order this again, just without the hot salsa. In its place I’d probably add in some cheese or lettuce. Overall, the burrito was pretty delicious and had all of the fundamental parts of a burrito- good meat, a strong tortilla, and multiple, balanced flavors.

In general, 610 kids swear by Moe’s, saying it is much better than Chipotle. Overall, it’s not much different. It’s the typical build your own burrito, burrito bowl, tacos, salad, etc. place. We decided to order a burrito with adobo chicken, cilantro white rice, corn salsa, hot sauce.

Going into this, I was a Chipotle fan through and through. I would have sworn up and down that Chipotle was light years better than Moe’s. Surprisingly, I was proved wrong. The ambiance of Moe’s is slightly different than Chipotle: it attracts more high schoolers from all the area high schools. It’s not a bad restaurant overall and their bathrooms are really nice.

The first thing I noticed was how incredibly small their burritos are. It is cheaper than the other burritos, but it is much, much smaller. Chipotle and Sweeto had baby sized burritos this was more like a more stuffed taco. I don’t mind this, it was a perfect size, but I wouldn’t be having any leftovers. But, here’s the kicker, their burrito tasted really good. The flavors were easily distinguishable and the hot sauce add some nice heat without being overpowering. The chicken was solid, something that all locations did well on. The thing that overall pushed this beyond Chipotle was it’s overall flavor profile that balanced all of the components. I would suggest going to Moe’s for all your burrito needs, but I will maintain that Chipotle has better burrito bowls.

Anne and I have the same unfortunate origin story. I’ve always loved Chipotle, and never went to Moe’s because I assumed that, since Chipotle was so good, Moe’s would be bad. I started coming to my senses when I realized that I rated a Chipotle burrito the same as Sweeto Burrito’s, let’s be honest, chicken tortilla monstrosity. Boy was I wrong.

Firstly, the spice of the salsa balanced perfectly with the other flavors and I could actually taste the chicken and rice. It was the perfect size for a moderately hungry person, but that could be considered a downside. If I was any hungrier than I was, then it wouldn’t have filled me, whereas Chipotle would’ve probably given me leftovers. The atmosphere was okay, it was a little darker and dirtier than I would’ve liked but still did the job in terms of comfortable seating and sunlight, since we sat right next to the door. Overall, I give this a 4/5 because I’ve had better burritos from specialty shops, but in terms of fast food burritos, this definitely took the cake.

If you’re looking for novelty or a fun night out, we would suggest going to Sweeto Burrito. It isn’t traditional in any sense of the word, but it does a decent job at presenting wacky burritos that are still palatable. Out of Moe’s and Chipotle, the two that are traditionally pitted against each other, we liked Moe’s better. It had the most balance of flavors with high quality ingredients. It’s main downside was the smaller size, so if you’re looking for size over quality, Chipotle is your best friend.