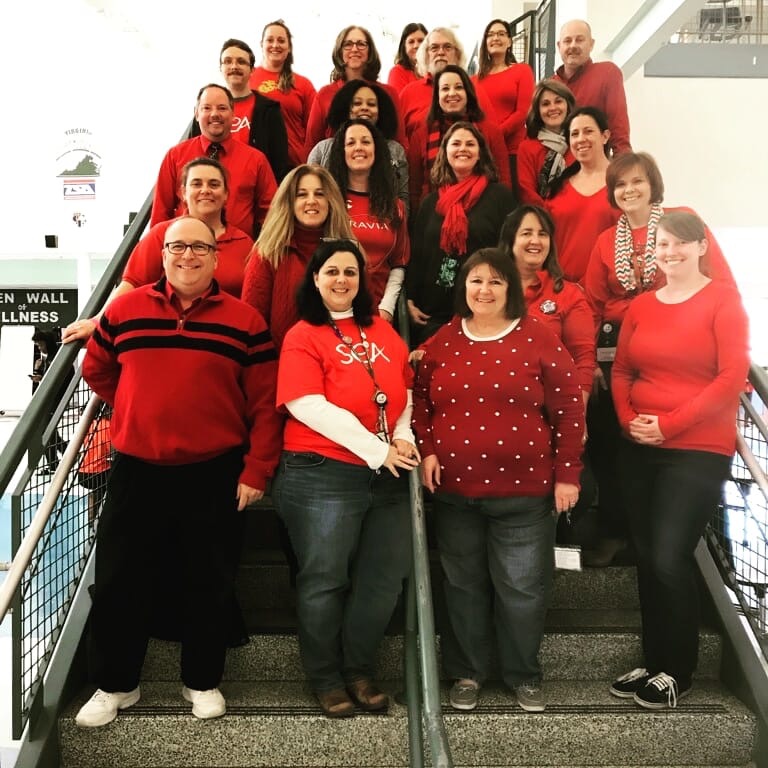 In the past few months, Stafford county teachers have been fighting for a 5% raise that was finally granted on April 30. The School Board passed the motion 6-1.

The Stafford Education Association (SEA) and individual teachers have been showing their support for the Red for Ed movement by wearing red shirts.

According to their website, the Red for Ed movement stands for “educators working around the clock to make a difference in the lives of their students and standing up to lawmakers to ask for better pay and school funding. We’re raising our voices together for our students, for our schools and for ourselves as educators.”

Teacher raises are complicated, because the school receives only a certain amount of funding from the Board of Supervisors. It’s like a game of ‘political football’, with proposed budgets and ideas being tossed back and forth.

Going into the most recent Board of Supervisors meeting, employees were hopeful. Mr. Lentz, a German teacher at Forge and SEA chair, is one of the teachers pushing hardest for the raise.

“I’ve always been an advocate that it shouldn’t be about the salaries but about the school funding, because funding is where the problem is. I mean, schools are underfunded, so naturally the salaries are going to be low,” Mr. Lentz said.

This funding is impacting not only the resources within our schools, but also the teachers themselves. The county has a reputation as a “training ground” for teachers where they teach for a few years before they realize they can make more money elsewhere and get the heck out of dodge. Mr. Grooms, a first year teacher in Stafford, fresh out of the Virginia Tech master’s program, is part of the population of young teachers likely to leave Stafford in favor of other Northern counties.

“At some point, I would be tempted to move for more money as I move towards having a family and buying a house,” Mr. Grooms said, “I think my current salary is pretty good, but I have a master’s, so that bump makes up for the pay difference between Stafford and Prince William.”

For teachers without a master’s, they would have to be teaching 15 years before they earn more than $50,000. In comparison, teachers in Prince William earn over $50,000 after only 5 years.

This raise is important to retain teachers within the county, but for Mr. Lentz and many others it’s not just about that.

“For me, it’s bigger picture. I want what is right and I want what’s just. Education has been beaten down for so many years that people think it’s just the way it is, but no, it’s not the way it is. Stand up and demand changes for the greater good.”