Understaffing in the School System

“There's a teacher shortage in almost every content area, it's hard to find a P.E. teacher nowadays, which is unheard of,” Mr. Gregory Daniel said. 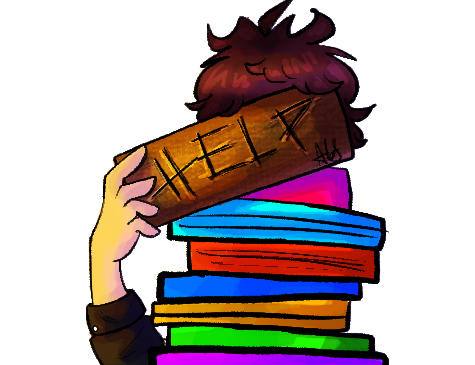 While bus shortages were at the forefront of media coverage, staffing issues in the school system hit every aspect of schools from teachers to janitors, leaving administration to juggle and solve problems and students crammed in classrooms.

At Colonial Forge, the school year began with six full-time and one part-time unfilled teaching positions.

By the end of the second fall quarter, a new fashion and finance teacher, who replaced a long-term sub, lasted three days until they moved on mid-semester to be replaced by a long-term sub; soon after, retired drama teacher Mr. Tom Clark came out of retirement to long term sub for tech theater after Mr. Marcus Salley was arrested and put on administrative leave.

In short, the staffing problem isn’t going away any time soon, in spite of hiring fairs for subs and teachers.

Students and teachers have both been overwhelmed with stress due to the understaffing, causing faculty members to advocate for mental health days to be added to the calendar, including Friday Nov. 12.

The lack of teachers is not just a county issue, but a national one. Across the country, schools are rushing to find qualified individuals to fill hundreds of thousands of vacancies. According to the National Center for Education, in the 2017-2018 school year there were roughly 3.5 million public school teachers; in 2022, it was estimated to be around 3.2 million.

“There’s a teacher shortage in almost every content area. It’s hard to find a P.E. teacher nowadays, which is unheard of,” Mr. Gregory Daniel said.

Due to the teacher shortage, many teachers have had to pick up the extra slack and take on more and more students. While it seems easy on paper, the reality is very different.

Some classes are bursting at the seams. Up to 30 students in a class is not uncommon, causing not only an educational concern but a health concern as well.

Desks can only be so far apart, which stretches the common ‘stay six feet apart’ rule for COVID-19 protocols.

“The class has 27 desks, very close together, I would guess three feet. Not all classes have 27 students, but it is pretty full most classes,” Dr. Patricia Kewer said about her earth science classes.

Other safety measures such as masks and hand sanitizer are still being utilized, but staying six feet apart is essential for battling COVID-19.

Teachers are finding it harder and harder to teach their students due to the number of students in the classroom at a time. The teachers are not only concerned with their own extra work, but with the safety and learning capabilities of their students being hindered by the overcrowded classroom.

“It is not like we could shift kids to another teacher, we are all overcrowded,” Mr. John Kopcak said. “So we just do the best we can and try to differentiate with the kids that we have. It is just much more difficult when you’re dealing with 30 kids versus 20. We can’t abandon them, so to speak, so we just play the hand we are dealt.”

A fierce debate has broken out on whether or not the software should be used, as supporters say it’s an easy and quick way to help the shortage of instructors, while critics say that Edgenuity deprives the student of vital one-on-one time and also point out cheating concerns due to students monitoring themselves.

“It is our own pace, so we do not really need a teacher,” he said before acknowledging one of the key issues. “I think cheating is easier because no one is supervising you,” said Christopher Rhoads (‘22), who takes Marketing and Statistics through Edgenuity.

Though we thought we had left Google Meet behind, some math teachers teach two classes concurrently, with ‘virtual’ students in another classroom supervised by a substitute. Likewise, teachers were required to open Meets to allow students quarantining at home to continue learning.

“It is very difficult to teach students in the class and in a Google meeting; it slows things down,” Kewer said.

Additionally, students need the energy and excitement of their teachers to care about the subject.

“With the teachers face to face you get personality in that class, especially if they’re passionate about the subject, but with the online teachers they are just standing there and reading words on the screen, which does not really inspire you to be excited to learn about that subject,” Brooke Drozdowski (‘23), Edgenuity student, said.

The math department is far more affected by the shortage than others. The core class needs a steady supply of teachers, which they currently do not have. At Colonial Forge since 2018 the school has lost 5 math teachers, down from a department of 16 to 11, representing a loss of 31%.

“We’ve had to be creative,” said Mr. Gregory Daniel, “and we have had to think out of the box in terms of making sure that we are delivering the same level of instruction that we would if we had staff.”

Math and English may be the main subjects affected by this overcrowding, but nearly every class in the school is affected in some form.

The problem is not new. Even from the 2000s, teachers were in short supply, with 10% of schools at the time having trouble finding both math and science teachers. Here, math teachers have to teach double blocks, giving up their planning blocks and increasing their course load.

For students, difficulties have increased this year regarding grades and understanding materials. Some classes have had to log into Google Meets due to the fact that they don’t have a teacher. When there is no one physically in front of you, it can be difficult to put all your attention into the class.

“I’m more prone to getting distracted since there isn’t anyone telling me what to do, I don’t pay attention as much leading to my grades dropping and the constant fear of failing,” said Cyara Wilkerson (‘24).

It takes some adjusting because students were not aware that they would be placed into an independent learning environment.

“It is difficult not being able to ask for clarification when I am confused, and having to self teach myself until I can understand the content well enough to pass a test,” Alexa Kaley (‘24) who is taking virtual pre-calculus said.

What isn’t always seen, is the effort being put in by other staff members trying to make this educational experience as smooth as possible.

Teachers could be using their planning block for other purposes, but they are instead using their time to fill gaps in staffing including covering classes due to a lack of substitutes.

It’s important to acknowledge how much effort the custodial staff are putting in to clean up after hundreds of students.

Our principal, Mr. Daniel, has even been moving trash cans and cleaning up in between lunches due to the lack of custodians. Four night custodians are responsible for cleaning around 106 classrooms plus community spaces and offices. In previous school years, we had seven night custodians.

“Those teachers are passionate about what they do, and they’re passionate about students and helping students. So a lot of teachers have made the sacrifice and have given up their time to make sure that we can provide instruction to those students who don’t have a teacher.” said Mr. Daniel.